I must admit: I rarely watch late-night television. I can’t remember the last time I watched Leno or Letterman, and my samplings of Jimmy Fallon have mostly been limited to some viral highlights — like the time he went full Neil Young and performed “Whip My Hair” with Bruce Springsteen. Thing is, I don’t think this is changing, either. And, yet, I’m still an all-time sucker for a solid live-music performance. And on Thursday, someone pointed out that Fallon’s NBC website archives all the performances into an easy playlist.*

*Play one video, and let the playlist run… if you can stand a Maker’s Mark ad every few songs, that is.

Right now, you can watch the Cranberries perform “Dream” (the 90s!), the Roots jam with Bon Iver’s Justin Vernon, and a trove of other gems (the Avett Brothers, of Montreal, Nada Surf). Yep. Go forth and waste time.  — Rustin Dodd 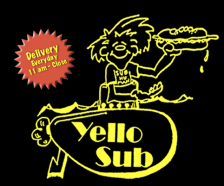 There are a lot of things I miss about Kansas. In general, food is not one of these things. The Midwest likes its food cheesy, robust and filled with red meat, while New York boasts a variety of cuisines, allowing you to choose between good ol’ cheesy meatiness and something less deadly. In short, the food is better here by proxy: More people, more cultures, more diversity, more deliciousness.

There is an exception to every rule.

In my 25 years of sandwich consumption (OK, maybe 24 or 23 years – do babies eat sandwiches?), I have yet to come across a sandwich shop as consistently delightful as Yello Sub in Lawrence, Kansas. Yello Sub will pile almost any combination of meats, sauces, veggies and cheeses you desire onto fresh-baked bread, and it will make you very happy.

The BBQ Chicken isn’t your traditional Kansas City barbecue sandwich, but it’s irresistible. The Classic Turkey is so brilliantly simple, fresh and flavorful that I am literally salivating just thinking about it…at 8:35 a.m.

Sure, the sandwiches in New York City are great. Corner delis get the job done every time and City Sub in Park Slope, Brooklyn, is almost as tasty and fresh as Yello Sub. But there’s no substitute for Yello Sub.

If you live in Kansas, go to Yello Sub, eat a sandwich, and think of me. On second thought, please do not think of me while eating your sandwich. That’s a little off-putting. — Asher Fusco

TV: This season of The Office

I recorded the first few episodes of The Office last fall on my DVR and just waited and waited. I never thought I would watch them. Would there really be a point? It had sucked for the last two years, and now Michael Scott was gone. Then I finally watched an episode. I think it was the one where Andy tried to impress his father while setting up this retreat for all the Dunder-Mifflinites. And it was hilarious, the funniest episode I had seen in three years, so I’ve kept on watching.

Yet every review I read of this year’s “The Office” has torn it down. Last week, the great Alan Sepinwall wrote that he now hated Pam and Jim, hated them.

This has been the best season since 2008. The last three have contained lackluster storylines, unfunny episodes and few highlights – aside from the wedding, Michael Scott’s last show, etc. Of course, this season still isn’t as good as the first three or four seasons. Few comedies on TV are.

But the Michael Scott character was getting stale. I wanted to see more Jim, Andy, Erin, Ryan and Kelly the last few seasons. Now we finally get to do that. And now with a few of those characters going to Florida for a three week business trip… next week’s looks so good.  — Mark Dent