Here’s the thing about this endorsement: It may all be a matter of opinion. As someone that has to spend a lot of time writing on a laptop, I generally have music playing in the background as I work. Sometimes it’s just random playlist, or a Spotify channel, or a whole album. But when I actually have to crank — write fast, or on deadline, or a really long story — I believe I have found the two most perfect writing songs. One is “Sigh No More” by Mumford and Sons, the other is “Transatlanticism” by Death Cab.
They are different type songs, of course. One is a sprawling, 8-minute opus that starts slow, with piano and guitars, before building into a nearly 5-minute crescendo (with a perfectly simple and repetitive drum line). The other starts as a slow, almost folky tune, before exploding into a bluegrass-stlyled force of music. But the build, the transition from slow to furious, I think, is what makes them so perfect. There are other things to consider. Even if something is a perfect writing song, it won’t sound that way the first time you hear it. It will sound foreign, and writing songs must be more than familiar. You must know every chord change, every progression, every symbal crash. So maybe this is all a matter of opinion — isn’t everything here? — but these songs work for me. — Rustin Dodd

Book: “Half the Sky” by Nicholas Kristof and Sheryl WuDunn 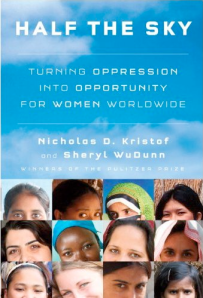 I always read to music. On the train, at the park, on my couch: I like the way music adds texture to my mind’s pictures of characters and settings and dialogue. When I read “Half the Sky,” I shut the music off. The book’s topic deserves my undivided attention. Also, I don’t particularly want the contents of the book creeping into my relationship with my favorite songs, the sounds I place between myself and life’s sharp corners.
“Half the Sky” is about what the authors call this century’s “paramount moral challenge,” the worldwide fight for gender equality. The book focuses on the deplorable treatment of women across the globe, most specifically in developing countries in Africa and Southeast Asia. Kristof and WuDunn travel the globe interviewing victims of human trafficking, forced prostitution, gang rapes and more subtle means of oppression such as substandard medical treatment and education. The work offers inspiring tales of empowered women who overcame heinous mistreatment with the help of organizations facing uphill battles against firmly entrenched — sometimes institutional — discrimination in Cambodia, India and elsewhere. “Half the Sky” is insightful, eye-opening, and worth missing a few hours of music for. – Asher Fusco

I’ll stick with the writing-esque theme for the endorsements today.

I bought Robert Andrew Powell’s book This Love Is Not For Cowards. Specifically, it’s about the Indios, Juarez’s hapless soccer team. Through that vehicle he explores everything the media has reported and, in some ways, manipulated about Juarez in the last several years.

When I bought the book, the very smart imperialists at Amazon.com suggested another title, Behind The Beautiful Forevers, by Katherine Boo. Boo’s writing background isn’t quite as crazy as Powell’s. She’s a writer for the New Yorker and a Pulitzer Prize winner. Her subject matter is equal, though. In Behind The Beautiful Forevers, she documents life in a Mumbai slum known as Annawadi. Though Annawadi is a slum, its inhabitants are hopeful, believers that they can make the leap so much of India has in the last twenty years.

It takes a lot to write a good story, a good song, a good book, a good documentary. But part of it is also simple: You have to show up. You have to hang around for a while. Boo and Powell had the courage to do both in two fascinating, dangerous locations.

In a way, this extends to everything in life, from jobs to personal decisions to social opportunities, especially in this age. Half of everything is making the decision just to be there, to try. – Mark Dent