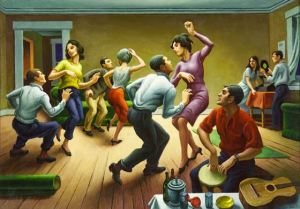 Thomas Hart Benton’s roots are in Missouri. He was born in Neosho; once worked as a cartoonist at the Joplin American newspaper in Joplin, Mo., and finally settled in Kansas City, teaching at the Kansas City Art Institute (where he’d cross paths with a rebellious young student named Dennis Hopper).* Along the way, he would become famous for his depiction of life in the U.S. — often in the form of conflict (old traditions vs. industrialization, the settling of the old west, etc.)

Still, “The Twist” has always been my favorite – just the way the people are jamming to some unknown song in what looks like some unknown apartment. The guy on the drum; the people surrounding the record player; the dude on the left who’s barely a foot off the floor. Just love it.

*Two other Kansas City connections: Benton once painted a mural “Achelous & Hercules” for the old Harzfeld’s department store in downtown KC. And you can still tour the old “Thomas Hart Benton Home and Studio Historic Site” at 3616 Belleview, just a mile or so from the heart of Westport. — Rustin Dodd

“Climax” was not at all what I expected, in a very good way. I stumbled upon the song while browsing through blogs and gave it a listen based almost solely on the single’s shadowy cover art, which struck me as decidedly un-Usherish. The teenage sensation-turned-megastar always seemed like one of those guys who remained popular because of his abs and his smile, not necessarily the quality of his music (see: “Yeah! Ft. Lil Jon”). I expected “Climax” to be his best R. Kelly impression: a song about sex and sex and alcohol and sex. It wasn’t.

The song tackles the slow, painful dissolution of a relationship, the “Climax” being the moment of truth when the involved parties decide to give up or push on. Musically the song is tremendous for its restraint, which is surprising given the fact it was produced by Diplo. The man most famous for fusing Bhangra beats and Baltimore bass with M.I.A. and crafting the aggressive dancehall assault of Major Lazer dials the percussion back on “Climax” to let the track breathe. In a way, the track feels like a sketch, not a standard-issue pop song. It never actually reaches its own climax, instead settling into a steady, gauzy groove. It’s not exactly a summer song, but it’s impossible to resist. — Asher Fusco

I believe in ghosts, sort of. I don’t believe in ghosts the same way Adam Smith believed in the invisible hand of the free market. I believe in them out of hope. In fact, as I’ve told several people who have proceeded to roll their eyes and throw boiling acid on me, I wish I lived in a haunted apartment. Not the REALLY haunted apartment that is built upon an ancient Native American burial ground and has demons flying into my soul while I sleep at night and leads me to chop a bunch of wood in an ultra-violent, Ryan Reynolds sort of way. That would not be kosher. I want an apartment that occasionally freaks the hell out of me. I’d want a ghost who once a month breaks a bunch of plates in the middle of the night or makes the room temperature drop about thirty degrees for no reason. The latter would be particularly pleasurable during the summer months.

Because I want to believe in ghosts, I love Friday the 13th and its purported curses and haunts. I enjoy hearing local radio DJ’s chirp about how they will be sure not to walk under ladders today or pet any black cats. I enjoy talking to my mom on the phone and have her warn me, “Be careful today, MARKY.”

Friday the 13th seems like a holiday that is not quite a full holiday. There is still work, there are no gifts and you don’t have to go to a religious service or anything like that. It’s a day that is slightly more cool than a regular Friday, if you even notice that it is Friday the 13th. I assume most normal people who are 25 years old do not notice when these days come. But I do. And on this Friday the 13th, I have one request: I finally want to wake up to a ghost breaking some of my damn plates in the kitchen! – Mark Dent