The other night I saw The Five-Year Engagement with a friend at Dallas’ Valley View Mall. Including us, there were six people in the theater for the beginning of the movie. By the end, a seventh joined. He was presumably an employee, a teenager who decided to sneak in as part of a self-made double-feature (the best kind), or Jason Segel, who had arrived for an intimate post-film Q&A. Based on a lingering suspicion in the back of my mind that this man was wearing a trench coat and accidentally stumbled into a real movie instead of an adult movie, I determined the Segel option to be the most unlikely.

Also, this was Valley View Mall, the only building in Dallas that has actually been placed on the state list of missing persons. I’d gone to two movies at Valley View in the last couple of years and frequented the adjacent JC Penney,* but I had never really taken the time to study the mall, or the lack thereof. It isn’t just empty. It’s a time capsule of the late 80s and the 90s. If someone actually visited the mall – no one does – you would expect him to be slinging a boom box over his shoulder listening to Heavy D and The Boyz.

*73 percent of my wardrobe is from JC Penney. The other 27 percent is from Ken-Taco-Hut.

This isolation is rather startling. As I left after The Five-Year Engagement, for the first time in my life I predicted I would be robbed at gunpoint rather than, you know, not be robbed at gunpoint. Under these chilling pretenses, I made a decision. I wanted to come back to Valley View Mall during the day.

Malls are dying all the time, all over this country. The Wall Street Journal says it is because of the recession, but I’m from Johnson County, Kan., and live in Dallas. I know better. Malls have been dying since before I was born. My first childhood memory is going to Indian Springs Mall and asking my mom to buy me a Batman toy, only to be interrupted by Harold, an implosion crew member who politely told us – and I quote – to “get the fuck out of this gosh-forsaken structure of tears, unless you want asbestos coursing through your veins.” We left without debating the plausibility of an asbestos injection.

In many cities throughout my life, I’ve seen the dead mall. Boards cover the windows and store signs tilt yet are never torn down. Your aunt or cousin reminds you how somebody was shot there in the vacant parking lot two weeks ago. I seriously remember walking into Kansas City’s Mission Mall on a Saturday afternoon in high school and seeing nothing, not a single open store, not even an Orange Julius. I’m not sure if I illegally trespassed that day or if they decided to keep the mall open for old ladies who liked to walk during the cold weather.

So I’ve seen mall death but never the mall hospice, the last moments of a suffering shopping center. Valley View Mall would give me that opportunity.

I arrived on a Friday afternoon around 12:30. Here’s a picture to back up those statistics regarding the anonymity of Valley View. 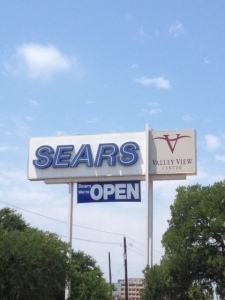 Yes, it must be explained to passersby that the Sears, its premium tenant (which happens to be bankrupt) is still open. Amid the swirling rush of humanity and cars, I found a parking spot and entered through south side immediately greeted by a handful of stores that one might guess would only exist at Valley View Mall or as a fictional backdrop in a SEGA Genesis game.

There was Dream. It featured $9.99 dresses. Malcolm’s Denim beckoned from across the walkway and is presumably the only store in America that sells Canadian Tuxedos. At Relaxation Station, Texas, a massage parlor, the man working in the store stared at me with the awe of a newborn child, like I was the first person he had seen in years, or perhaps the first person he had ever seen.

A waterfall dripped in the distance, “Billy Jean” , and a child cried and janitors rolled a clanking pallet somewhere. People had to be here. Somewhere. I just couldn’t see them. Surely they would be at the food court. It was the lunch rush. They weren’t.

On my way downstairs, I passed by the first of many jewelry stores I would encounter on my journey, the majority of them featuring this sign, or something similar, in the window. 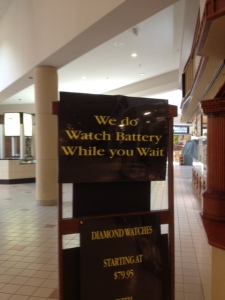 Forget about the mangled grammar. Think about the content of the message. We will change your watch battery while you wait. Um, how is that worthy of advertisement? You can wait while someone does anything, or while someone does nothing. In fact, waiting is what you ALWAYS do when someone else takes time to do something for you.

The sign has probably confounded the people who never go to the mall since the early 1980s. In 1982, Valley View Mall fell into the coma that preceded its impending death. That year, The Galleria opened a mile away. It featured an ice skating rink, a SAKS, a Westin and probably one of those carts situated in the middle of a mall walkway that sold LASER PENS, so Valley View Mall was pretty much screwed. Life support began in the 90s as it entered bankruptcy, and the mall has never really come out of it, maintained apparently by… low rent?

Downstairs, near the food court, a carousel rotated, its horses lacking children. The man who operated the machine fiddled on an IPad. He said he runs the carousel, without any patrons, every few minutes just so people know that it isn’t broken down. I asked him about the mall. “It’s a tomb,” he said. He said it will soon be resurrected by developers who want to tear it down and morph it into an outdoor entertainment district that they will call Midtown.

Then I left. Even though I’ve been off work these last couple of weeks, my journey was still kind of a waste of time. Valley View Mall certainly isn’t worth visiting for shopping, nor is it worth visiting to gawk at, unless, maybe you get a new watch battery installed while you stare.