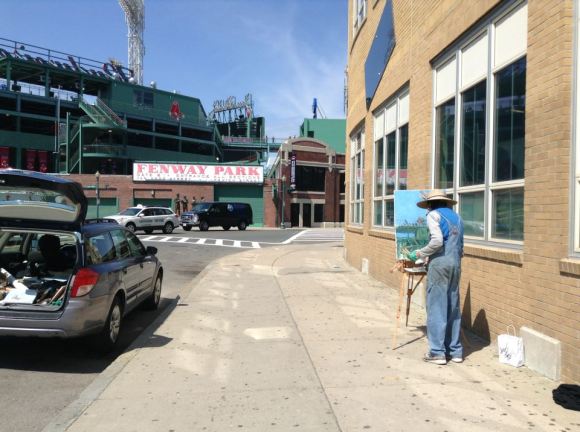 BOSTON — The city was quiet.

The sidewalks were empty. The sun was luminous, reflecting off the Charles. The humming of traffic echoed off the concrete and against the exterior of Fenway Park.

It was a Thursday in April, three days after the bombs went off, and I decided I needed to run through Boston. I had arrived in town on Wednesday, to see a girlfriend, a vacation scheduled weeks before the annual marathon. But as I laced up my running shoes for a jog from Cambridge, just near MIT, to Back Bay, where the bombs had ripped through the finish line, the man hunt was still on.

I don’t know why, but running felt like the right thing to do. Whenever I hit a new city, I always like to explore with a pair of running shoes. You can feel the pulse that way; you can feel the way the neighborhoods connect, the way people live and work in a great American town.

There were people running along the Charles that day, dozens and dozens of them. Young college students. Professionals taking a long lunch break. Tourists in town to see a baseball game or spend some time in Quincy Market. The sidewalks in Back Bay were empty, save for the image of television trucks or police cars, but the running trails along the river were nearly packed.

I jogged across Harvard bridge, past the old houses of Back Bay, past the emptiness of Boylston Street, past the edge of a garden at Boylston and Charlesgate, towards the old ballpark.

Two days later, David Ortiz would stand in the middle of Fenway Park and unite New England with five words: “This is our fucking city!” But on Thursday, I just wanted to see something that felt like Boston.

Moments later, I saw her, standing on Ipswich Street.

She wore fading, paint-stained overalls, and her skin was pale and cracking. She wore a wide-brimmed hat to protect her from the sun. She faced the stadium, a paintbrush in one hand. The trunk of her four-door wagon was open, art supplies spilling out the back.

Her name was Anne McGhee, a local artist who had once lived in Kansas City. Her father was a painter, and her mother was an actress, and Anne had once worked as a silver designer at Tiffany’s in New York. It was good money, she said, a career. It was New York.

“I was very young, and they wanted me to stay,” Anne said. “But I wanted to paint.”

So here she was, three days after the bombings, working on a series of paintings of Fenway Park, the great American ballpark, standing alone on Ipswich Street — except for me and a couple of cops at the end of the block.

“It’s the same thing as painting,” she said. “Making something out of nothing.”

Anne had walked down to Boylston Street in the morning, to watch the elite runners come in. The annual party was on, the streets were filled, and when she had seen enough, she headed back to her office at Fenway Studios.

“Boom, Boom,” she said. “I thought something had turned over on the turnpike. But then they came down and told me what had happened.”

She paused for a moment.

“Everything has felt totally empty.”

One year later, I was thinking of Anne, and her paintings of Fenway Park. I was also thinking of Boston. On Monday, Meb Keflezighi won the Boston Marathon in a time of 2:08.37. He became the first American man to win since 1983, and the party raged on in Boston.

“It was catastrophic what happened on Boylston Street last year,” Keflezighi said. “But it happened once in 117 years.”

This was Boston. The Red Sox played a baseball game, and the fans packed the finish line, and amateur runners laced up their running shoes and went for leisurely jogs along the Charles.