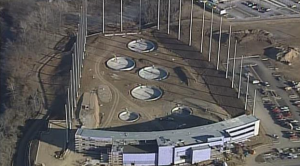 This is a story about Topgolf, an old neighborhood and why suburban sprawl kind of sucks. So yes, consider this a warning of sorts.

Last week, a Topgolf, one of those shimmering golf palaces of suburbia, opened in the neighborhood where I grew up. This sucks for a number of reasons, and not totally because Topgolf sucks — it sort of does, but sort of doesn’t — and I will explain all this in a moment. But first, let’s start at the beginning.

If you are not familiar with Topgolf, it’s this (relatively) new suburban golf craze in which people huck down tons of cash to hit golf balls and/or drink beer in a climate-controlled environment. It’s sort of like golf meets bowling, but not really. It’s more like a driving range had a three-way with a Buffalo Wild Wings and a Dick’s Sporting Goods, and it produced some monstrous thing to plant somewhere in the land of big-box stores. Again, this is not to disparage Topgolf. I’ve heard great things.

If you have never seen what a Topgolf center looks like in the wild, it almost seems like somebody decided to raise a T-Rex next to some centrally-located, carefully-planned highway system. The netting apparatus, erected to keep some accountant with a 17-handicap from doing some real damage with a hybrid-wood, is like 7,000-feet tall, and that’s just the perimeter. The new Topgolf in my old neighborhood is 65,000 square feet of turf and targets and decently-priced fishbowl drink specials with names like “Melon Mulligan” and “Flagstick Swizzle.” 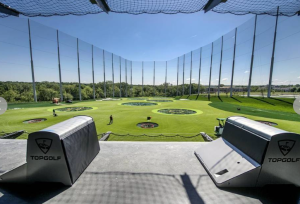 This is not to say that Topgolf is a bad idea (the profit margins, presumably, suggest otherwise) or even a bad time (who doesn’t like crushing some drives and drinking a few domestics). But in simple terms, this is not the kind of thing you want popping up in your general vicinity, especially when you grew up in a 50-year-old subdivision that served as something like a weathered enclave from the miles of sprawl, fancy strip-malls and McMansions going up just south of you.

I grew up in Overland Park, Kan., a sprawling Kansas City suburb that has, in a way, come to define the modern suburb in America. As of the 2010 census, Overland Park had more than 170,000 residents. (It’s still growing.) There are a million high schools, and a million chain restaurants, and a million youth soccer fields. There are nice parks and usable running paths and the real estate is relatively cheap. The Midwest can be a beautiful thing. If you’ve seen one of those lists of the best places to grow up in the United States, chances are you’ve seen Overland Park on those lists.

I grew up central Overland Park, right where the old neighborhoods in the north part of town met the turbo-charged sprawl that came about on the heels of the bountiful Clinton years. If my family wanted to go see New Suburbia — hey, a Dean and Deluca! — we could do that. If we wanted to go to the nearest 24-theater megaplex, we could do that, too. But if we wanted to avoid the more soul-less aspects of suburban life, we could (attempt) to do that as well. We could stay in our old neighborhood, filled with ranches and modest split-level houses, and we could walk to all the local schools, and we could at least take solace in the fact that a couple of old families that owned some land around my high school had refused to sell out.

There was even a natural boundary — a highway that cut right through the heart of Overland Park — dividing the old and the new. From a logical sense, the old was no better than the new. It was all suburbs, after all. But the old did have a little more character, a little more grit, a little less New Money, and that was at least something.

This is where Topgolf comes in. They built that gigantic fucker on the my side, the old side, just a mile up the street from my house. And it’s really weird.

OK, this is the part of the story that’s going to sound like some NIMBY whining, and whatever, maybe that’s not far off. But I think it’s more than that. This specific Topgolf, the one built in my childhood neighborhood, went up right across the street from my old high school, adjacent to this environmental science lab that helps high school students learn about prairie dogs and native grasses — and that “Ishmael” by Daniel Quinn is an important book to read. (Full disclosure: I never read it.)

They built the Topgolf on an old plot of land that used to be an empty field, some family’s land, across the street from some new apartment complex that went up in the last decade. On the other side is an old park where little kids play soccer and people ride bikes. Across the way, there’s a hospital and some other free-standing medical clinics and offices.

Twenty years ago, there was nothing here, and now there is, so I guess that’s progress.

And that’s the thing: I guess there is no perfect place to build a giant turf driving range, with those colossal poles and gigantic nets hovering over the neighborhood like a modern bigtop. A few years ago, some guys from London came up with the idea for Topgolf, and people like golf, and people like beer, and it’s not a bad idea. This is suburbia, after all, and we have to sprawl south, got to build more shit, got to keep moving and developing and offering chain establishments to have birthday parties and happy hours.

And, of course, there’s this: Next time I’m home, maybe the family will go enjoy some Topgolf. Order a Flagstick Swizzle. Maybe some wings and nachos. It’ll be an easy drive, just a minute or two door to door. Nice parking lot, too.