As a shameless atheist, proud supporter of LGBT equality and women’s rights, and general advocate of stances deemed unholy, I respect Tim Tebow.

END_OF_DOCUMENT_TOKEN_TO_BE_REPLACED

The heart of Joplin 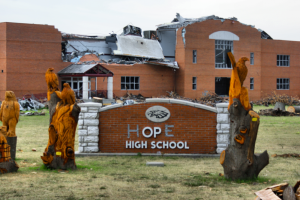 You see the pictures, and you read the stories, and you think you can understand.

And then you arrive in Joplin, and drive down 20th street, and stop in front of the old high school.

There are Eagle sculptures out front, carved from the remains of shredded trees. The rubble sits behind, one of the biggest high schools in the state laying in ruins.

And these are just words, and the photos are just photos. And you can’t explain it.

You have to go there.  END_OF_DOCUMENT_TOKEN_TO_BE_REPLACED

This story starts at a McDonalds off the highway in Blue Springs, Missouri.

Donohoe once was a star high school football player in Harrisonville, Mo. He once played quarterback at the University of Kansas. He’s not a imposing figure. He’s graduating class at Kansas celebrated their 20th anniversary this year, yet he still looks like he might be carded by a strict bartender.*

*Upon further review, Donohoe vaguely resembles Oklahoma State coach Mike Gundy. This is mildly interesting for two reasons. One, Gundy and Donohoe were both quarterbacks at Big Eight schools in the late 80s. Donohoe at KU and Gundy, of course, with the Cowboys. And two, this gives me an opportunity to tell my Mike Gundy story.

Gundy, of course, is most famous for his “I’m a man. I’m 40” rant. And of course, this rant was directed at a columnist at the Daily Oklahoman named Jenni Carlson, who once attended the Journalism school at the University of Kansas. (Far above the golden valley!)

Gundy was upset with a column that Carlson wrote about former Oklahoma State quarterback Bobby Reid.

In short, the column attacked Reid’s mental toughness and painted a scene in which Reid’s mother fed him chicken tenders with her own fingers. Yea. A little bizarre. Anyway, after a game in 2007 (I believe Texas Tech), Gundy called out Carlson and had his iconic rant for the ages. Two years later, you could argue that Gundy’s rant is the most quoted outburst from a coach in the history of sports. Really, some of Gundy’s lines — “…CAUSE HE’S FAT!”, “WHERE ARE WE IN SOCIETY TODAY?”, and “I’M A MAN…” — have seeped into our pop-culture lexicon. But in the 2007, the Gundy rant was still hot. It was a YouTube sensation. And it was parodied everywhere.

But if there’s one thing I remember, it’s the orange OSU background. You see, Gundy went on his rant in a small press conference room at T. Boone Pickens Stadium in Stillwater. And as he ranted, he paced back in forth in front of an Orange backdrop adorned with OSU emblems. That backdrop became a symbol of that rant. I suppose it wasn’t a great advertisement for OSU athletics.

But this was 2007, and this was also the year KU had its Dream Season – at least, according to Sports Illustrated. Kansas won its first nine games that year. And the Jayhawks traveled to Stillwater in November for a Saturday night primetime game on ABC. It was a big game for a number of reasons. For one, by the time that game kicked off, Kansas was the only undefeated BCS school in the country. (I believe Ohio State had lost earlier in the afternoon.) So there was definitely a buzz in Stillwater.

I made the drive down with three friends to cover the game for KU’s student radio station, KJHK, and the school paper, The University Daily Kansan. When we got down there for the game, Kansas City Star columnist Jason Whitlock had just learned about Ohio State’s loss, and he was running around shouting, “This is the biggest game in the country!”

Like I said — there was a buzz. Kansas, of course, would go out and blitz Oklahoma State. And Kansas was introduced to the nation. Todd Reesing would play brilliantly (so would Marcus Henry), and ABC’s Brent Musberger would utter the words, “Shades of Doug Flutie”, and afterward, Henry and linebacker Joe Mortensen would sit in a cement concourse at Boone Pickens Stadium and tell a group of reporters what it felt like to be the last undefeated BCS team in college football.

I stood and listened to Mortensen for a moment. Kansas was 10-0 and it was all quite hard to believe. But I also wanted to see what the Cowboys’ Gundy would say about the Jayhawks. So I hustled over to Gundy’s post-game press conference and quietly sat down in the back. I can vaguely remember what Gundy said. Something about how Kansas was “real good” and how they “deserved the credit.” But I wasn’t really listening. I had taken my seat and looked around the room at all the reporters. Then I looked forward and saw it: That familiar Orange backdrop. And then I saw Gundy walk in. And all I could think about was YouTube and the rant and all those ridiculous words. Wow, I thought. This is THE ROOM.

But yes, Donohoe — the man who looks like graduate student — is a leader. When Donohoe talks, his players listen.

His team had routed Lee’s Summit 45-12. And His team has a young running back named Darrian Miller, who is one of the best football players in the city. He’s rushed for more than 2,000 yards this year. He is 5 feet 9 and 180 pounds and he is old-school. He doesn’t dance. No, he hits the hole with speed and power, and he runs ferociously and explosively. He is only a junior, and his myth is only starting to grow. You might hear about him some day. But for now, he flies around under the lights at Blue Springs High School, and little kids whisper his name.

I suppose this is where the story comes together. I covered Darrian and Donohoe and Blue Springs on Friday night for the Kansas City Star. They will play Kansas City power Rockhurst next week for the right to go to the State semifinals.

But there is something great about covering high school sports. Here’s the thing: For four hours every Friday, you are transported back in to high school.

I know not everybody had a great time in high school. It can be a confusing time.

But there is something great about high school sports. I played basketball and baseball when I was in high school, and it was great. I could write for hours about those experiences. But in some ways, high school football games were just as special.

Groups of friends, chilly fall nights, the school band blasting out the high school fight song. Obnoxious middle school kids running around and awkwardly flirting with members of the opposite sex. This is high school football in the Midwest.

And no matter where you are, there are a few things you will always see at high school football games.

The home school will always brag that they have the best band in the state.

*Excuse me, but I’m throwing a shoutout to the “Rompin’ Stompin’ Raider Band” from Shawnee Mission South – Nothing greater…

The home school will always brag that they have the best teachers in the World.

And lastly, there will be an IHOP, or a McDonalds, or a Buffalo Wild Wings near the school, and these places will be packed after the game.

High school kids will sit in these restaurants and try to figure out what to do that night. And usually, they will end up driving around aimlessly, while looking for a place to drink.

So after Friday night’s game in Blue Springs, I was sitting at McDonalds. This McDonalds had wireless internet and I had to send in my story. I was 30 miles from where I grew up. But this place looked familiar. I saw the kids outside, looking for something to do. I figured they were 15- or 16-years-old. I figured they were Missouri fans.

A few miles away, there was a shopping center and commercial development area. There were Old Chicagos and Targets and Applebees and Chipotles and Paneras and other semi-expensive clothing stores. And then I had some very deep thoughts about the nature of sprawl and progress and the fact that every suburb in America seems to look exactly the same.

And to be honest, I’m not sure what it all means, but as I was stewing on my incomplete thought, I was interrupted by a mom in a Blue Springs football jersey.

She had seen my Kansas City Star photo ID.

“You from The Star?” She asked.

“Well,” she said. “Hope you write something good about us. Blue Springs is pretty tough this year.”