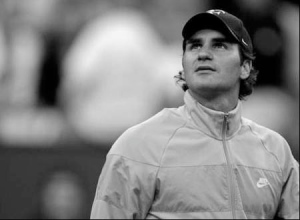 “Roger Federer moves like a whisper and executes like a wrecking ball. It is simply impossible to explain how he does what he does,” — legendary tennis coach Nick Bollettiery

It came one year after a five-set loss to Rafael Nadal in the Australian finals left Federer drained and bawling on the court at Rod Laver Arena.

On Sunday, Federer tried to explain what the match meant. It’s another title, his fourth at the Australian… and his first as a father.

“If tennis ended today, I would still be a happy man,” Federer said, “… But I choose to keep going.”

Now on to the facts…

– On Aug. 1, 1981, seven days before the birth of Roger Federer, MTV launched as a cable channel in America.

– Since Federer’s 2003 Wimbledon title, there have been 27 Grand Slam tournaments.

– Federer won a gold medal in the 2008 Beijing Olympics — in doubles.