A Case for Tom Brady* 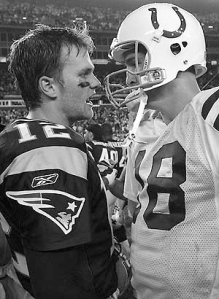 Here’s the deal… The 30-minute case for Tom Brady is really about two things.

Tom Brady may be a better all-time quarterback than Peyton Manning.

Then again, Peyton Manning may be a better quarterback than Tom Brady.

See the theme in those sentences? May. Yes. It’s the world “may.”

It’s an auxiliary verb. The kids may* remember it being called a helping verb** in elementary school.

In the simplest terms, it’s used to express possibility.

I may be wrong. This may end up taking longer than 30 minutes. You get the point.

And yes, this may be true. By any statistical measure, Peyton Manning belongs in the stratosphere of NFL quarterbacks.

But here’s something that is a little disconcerting.

The Peyton Manning story — the narrative that this is “his moment”, this is the week that he becomes the best of all-time — seems to have taken over the Super Bowl.

Why is this troubling? Well, for one, Drew Brees and The Saints could very easily throw a bucket of water on the story on Sunday.

And secondly, I’ve heard very little discussion on “why” Manning is better than Brady or Montana or Elway or all the rest?

*Peyton is the smartest quarterback in football. He’s a guy that makes his teammates better. He watches hours and hours and hours of film, and wow, what a player. He’s the best ever. It’s not even close.

You know the term group-think? I guess it’s something like that.

And yes, Manning is a phenomenal quarterback. But it’s not exactly clear-cut. And these talking points, these facts people keep bringing up… well, sometimes they’re not even really accurate.

For instance, there seems to be some revisionist history going on about Manning and Brady.

If you’re listening, you might have heard somebody argue that Brady has been surrounded by playmakers in New England all these years. And, oh yea, he had Belichick and that defense. Manning never had that, they say.

And you might hear somebody argue that Manning has been throwing to bums all these years. And that he won a Super Bowl with lesser players –- and an average defense*.

*More on this point in a minute. But Dwight Freeney, Bob Sanders and Robert Mathis say hello.

OK, we’re running short on time. So let’s just break it down. Brady versus Manning. Here we go…

– Tom Brady is 7-4 against Peyton Manning.
*The most completions in Super Bowl history.

Now let’s move on to Peyton.

In 12 full seasons, Peyton Manning has 366 touchdown passes and 181 interceptions. His passer rating is 95.2

In his best season, he threw for 49 touchdown passes.

– Peyton Manning is 4-7 against Tom Brady.

OK. Let’s do a quick recap.

Now you might bring up the fact that Manning has done more with less. Oh yes, the “Brady had a better team around him” argument.

So here’s the question: Has Manning really done more with less? To answer this question, we’re going to get a little help from ColdHardFacts.com.

Here’s a great excerpt from the site. It’s a little dated. And in the past three years, we have seen what happens when Brady is given high-caliber receivers – Randy Moss, Wes Welker – to work with. But it seems the Colts have spent most of their time making sure Manning has had plenty of weapons to work with… — full article here

…It’s a strategy that seems to have Manning’s full support. In fact, in the 2001 draft, Manning lobbied the team to select wide receiver Reggie Wayne of Miami in the first round despite the fact that the Indy offense already featured a future Hall of Fame receiving talent in Harrison and despite the fact that the porous Indy defense surrendered 20.4 PPG in 2000. (The Indy offense averaged 26.8 PPG in 2000.)

Manning, himself a No. 1 draft pick, was surrounded by top-pick talent in 2004 at

That’s six of 11 offensive starters who are No. 1 draft picks. At least one, Harrison, is a lock for the Hall of Fame. James is a potential Hall of Famer. Manning had the luxury his first year in the league of handing the ball to future Hall of Fame running back Marshall Faulk, one of the most prolific offensive players in NFL history. Manning has also enjoyed the luxury of offensive Pro Bowlers ever year that he’s been in the league: Faulk (1998); James (1999, 2000, 2004); and Harrison (1999-2004).

In other words, the Colts have purposely built a team that gives its quarterback a chance to pad the stat book.

Brady has built his prolific career with a much different set of tools. Consider that he’s New England’s only offensive player to be named to the Pro Bowl since 2001 (New England running back Corey Dillon appeared in the 2004 Pro Bowl, but only as an injury replacement). Brady’s top receiver has been Troy Brown, an NFL journeyman who was drafted in the 8th round (198th pick) out of Marshall. Meanwhile, consider the pedigree of the players on the receiving end of Brady’s six Super Bowl touchdown passes:

So our 30 minutes is nearly over. Perhaps Manning will win this Sunday. I do have a sneaking suspicion that the Saints are going to do something special. And maybe Manning is the best quarterback ever. But I think it’s debatable. Very debatable. And that’s the whole point. Although, I do think Tom Brady has a very good case.