The moment you step into the subterranean, no-frills gymnasium on Manhattan’s Upper West Side, it’s clear that this isn’t the land of blue-chip recruits, multi-million dollar budgets or unscrupulous “advisors.”

Truthfully, that much is readily apparent the moment you exit the 1 train at 116th Street and meander up the decrepit staircase into the brisk January air among a crowd of chattering students, an elderly couple or two and a few scattered fans in team colors.

Through towering wrought iron gates, a small avenue leads into a grassy square flanked by enormous, stately buildings* that evoke eras past when New York City was in the early throes of reconciling its European origins with its American upbringing. To the left, up a few minor inclines and past a couple of stone lions, is the entrance to Columbia’s Levien Gym.

* Most impressive is the massive Butler Library, which seems to anchor campus architecturally and can be best described, in my completely unknowledgeable opinion, as a temple to knowledge.

For those without a ticket, there is a two-window box office in the basement. Fifteen minutes before tip, there is no line, nor room for one. Admission runs in the tens, unless you require one of the few available seatbacks. Modest stands rise from each sideline, and press row is practically empty save for a few striving student journalists and the play-by-play and color guys who transmit the proceedings via the athletic department’s website. 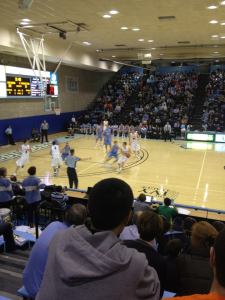 During TV timeouts, a student marketer who is MCing a running trivia contest challenges fans to name the first president born in the 20th century or text in the lone letter that fails to appear in the periodic table of elements. (JFK and ‘J’ if you’re curious.) The women’s basketball team eventually earns top honors, taking home some goodie bags to halfhearted applause.

On a nondescript weekend in January, Columbia and Princeton are fighting the good fight* for what will likely be fourth or fifth in the conference this season. It’s the second stop in what I hope will be a parade of East Coast gymnasiums over the next few months.

* Princeton won a fairly nondescript game 62-58, highlighted by scrawny Columbia point guard Brian Barbour’s 25-point effort and a cheeky Tigers’ fan sneaking his orange-and-black ball cap onto the head of the oblivious Columbia Lion as it led the home fans in cheers.

The first was Rose Hill Gym in the Bronx – the oldest on-campus arena still in use in Division 1 – for a matchup between surprisingly scrappy Fordham and a still-reeling Xavier squad coached by a gimpy Chris Mack, who, bizarrely, shredded his knee dunking in the layup line the day before. What the building lacked in size, it made up for with charm – stone walls and an arched roof spanned by steel trestles framing a large, sunny window above the baseline.

And like Mack’s freak injury – an immobilizing brace was hidden underneath his slacks – the game itself was bizarre in its own right, as the visitors struggled to toe the line between being aggressive and reinforcing the reputation they earned following a much-maligned dust up with Cincinnati. All-American point guard Tu Holloway didn’t score, Mark Lyons played with a back-breaking chip on his shoulder and the Musketeers weathered a late comeback to escape with a 67-59 victory, just their second win in seven games.

On Wednesday, I’ll take in a Big East showdown between Queens-based St. John’s and Bob Huggins’ West Virginia ball club at Madison Square Garden. Ten days after that, I’ll board an Amtrak train bound for Philadelphia for my first game at the Palestra, a local derby between A-10 rivals La Salle and St. Joseph’s.

These four games are just the beginning – I hope – of what will be a sort of self-taught East Coast Basketball 101, a further examination of the game I learned to love growing up in Kansas’ college-dominant sports environment. By March, if all goes as planned, my roundball passport will have stamps from St. Anthony’s High School in Jersey City, most of the modest college teams that call the five boroughs home and a sure to be overpriced trip to MSG to watch the Knicks and drink $12 domestic beers.

My goals are admittedly modest. Boiled down to the most basic motivations, I’m simply a Midwest transplant trying to fill my free time in a city and region I barely know or understand. Basketball will be the proverbial wind in my sails as I set out to explore parts of New York City and the surrounding areas that I probably wouldn’t have set foot in otherwise.

Along the way, I’ll do my best to share what makes each team, institution and gym unique, whether that’s some incredible occurrence on the court itself or Ivy League trivia during breaks in the action.

Hopefully, my observations strike a chord. More likely, they’ll just be reminders of my first winter on the East Coast.