I’m still new to the IPhone. I’m still learning about all the cool secrets, like how to operate the camera in a non-moronic way, and I don’t even use Siri all that much.* I know my apps, though.

*In fact, I only use Siri when I’m messing around and ask her something like, “Where can I score some drugs?” Pretty funny!!

It’s heaven, especially during the fundraising times, which the Dallas NPR station is experiencing right now. I can just switch to a different station. — Mark Dent

Song: “Let Down” by Radiohead 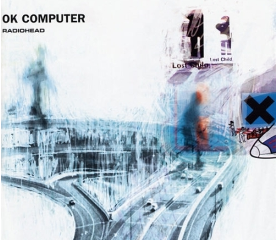 When a band has released eight full lengths, seven EPs, a remix album and an array of B-sides and singles over the course of 19 years, individual songs sometimes get lost in the shuffle. Radiohead’s body of work is so expansive and so diverse that sometimes it’s worth taking the effort to stop, listen closely and remember that they’re the best pop band ever because they’ve written the best pop songs ever. Sure, they’ve changed music, inspired countless others, and sold a zillion albums. But that doesn’t happen without one song, another song, a third song, and so on.

Stuck in the middle of OK Computer, just three tracks after the album’s biggest hit (“Paranoid Android”) and immediately preceding its accessible hit (“Karma Police”), “Let Down” is a masterpiece. It’s just a song – given, a beautiful song – until the 2:28 mark. The bottom drops out of the chorus, leaving one shimmering, bending electric guitar phrase. Then a twinkling guitar on the left. Warm feedback on the right. Kick drum and a cymbal in the back. Another electric guitar on the right. Near-human synth beeps and chirps coming from everywhere.

It covers you like a blanket, pushes out on your ears, makes your head move, touches your neck and moves down your spine. That’s what music is supposed to do. – Asher Fusco

You probably know that Adam Yauch, otherwise known as MCA, one of the founding members of the Beastie Boys, died on Friday. He was 47.

Yauch’s death set off a deluge of Beasties reflection throughout the music community — See Coldplay’s heartfelt tribute performance of “Fight For Your Right — and Twitter was flooded with references and 140-character memorials.

I read plenty about Yauch’s life — some things I knew, some I didn’t; for instance: Did you know Yauch directed a 2008 basketball documentary, “Gunnin’ for That No. 1 Spot”? … Or that the Beastie Boys once toured with Madonna in the mid 80s?

From the New York Times’ obituary:

“In the history of hip-hop, the Beastie Boys were both improbable and perhaps inevitable: appreciators, popularizers and extrapolators of a culture they weren’t born into.

“The Beasties opened hip-hop music up to the suburbs,” said Rick Rubin, who produced the group’s 1986 debut album, in a recent interview with The Plain Dealer of Cleveland. “As crazy as they were, they seemed safe to Middle America, in a way black artists hadn’t been up to that time.”

But for most, I think, this was remembering where you were when you first heard that sound, that improbably (and sort of illogically) entertaining blend of rock and punk and hip-hop … and these three Jewish kids from Brooklyn screaming over it.

I was one generation removed from the Beastie Boys’ origins. So for me, the first song I can honestly remember playing on repeat was “Intergalactic”. I can remember being 11 or 12, listening to it at a friend’s house, watching the video on MTV, and later downloading it on Napster. Nowadays, when I hear the song, and those explosive opening lyrics — “WELL… NOW… DON’T. YOU TELL ME TO SMILE!”— it always feels like 1998 again. Always. — Rustin Dodd