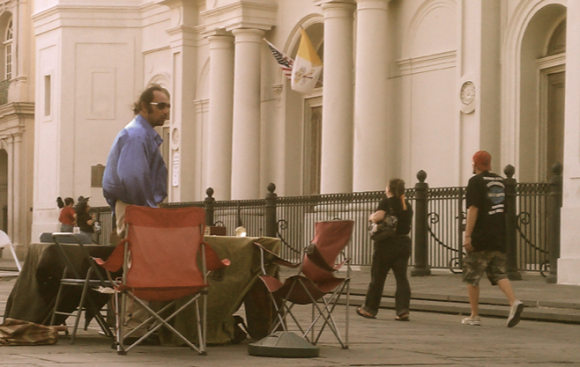 NEW ORLEANS — The Gypsy Man in the blue shirt was shouting, his voice careening off walls and into empty alleys.

“I’m the fucking gazda,” he would say.

It wasn’t quite a scream, or a bellow, or even a holler. It was a quiet shout, if such a thing exists. And he was directing his seeming anger toward a young woman named Gina. I can’t say that Gina was strung out. But she looked it. Her skin was brown, but maybe just a tick too translucent. Her teeth were a mangled mess. Her hair was thinning and brittle. More than that, she appeared disoriented — the toxins in her body winning a battle over the healthy endorphins, if such a chemical process is even possible.

“We’re gypsies!” the man in the blue shirt shouted.

By now, I looked up from my book. I didn’t want to stare. But I couldn’t help it. Blue shirt man was stomping around, his black leather boots pacing between two tables in this small park. I was sitting on a bench in the French Quarter, New Orleans’ famous blockular maze of bars, strip clubs, diners and little souvenir stores that sell overpriced pralines.*

*Pralines are one of the most amazing sweets in the world, in that they taste worse with every bite. First bite. Fucking amazing. Second bite. Still good. Third bite. Hey, this texture is a little off. Fourth bite. Man, maybe this is a little too rich. Last bite. Oh my god, this little chocolate sugar thing totally ransacked my stomach.

I was in New Orleans for a few days. Vacation time. And I had ventured to this little spot in the quarter on my own. Behind me sat Jackson Square, a patch of green amidst the soiled streets of the surrounding blocks. Around the corner was the Faulkner House, the place where the great novelist had spent a few of his formative years, working on his first manuscript among the bohemians and drunkards. These days, the Faulkner House, which sits at 624 Pirate’s Alley, is home to a couple who live upstairs and run a shoebox-sized bookstore on the street level.

When I walked into the book store, just large enough for you to tip-toe around a small table in the center, another young woman was finishing up her shopping. As she turned to leave, I was startled by a voice.

“Sorry you couldn’t find anything,” the old woman said.

“No… I think I found TOO much,” the young woman answered, pushing the door open and disappearing in the sunlight.

The old woman was sitting at a small table behind a stack of books. Her hair was gray. We exchanged nods and I kept looking. I fingered a couple books on the shelf before finding a familiar title on the table: “Zeitoun”

Written by Dave Eggers, Zeitoun is the story of a Syrian immigrant-turned-successful entreprenour who experiences a certain kind of hell in the aftermath of Hurricane Katrina. I had once heard an interview about the book on Fresh Air. I decided to buy it.

Moments later, I was finding a comfortable bench in the quarter. It was close to 75 degrees, sunny and perfect. And I had nothing to do but read.

Then I saw the man.

“I’m the fucking Gazdah,” he shouted.

From that moment on, I couldn’t take my eyes off Gypsy Man. He seemed to relish in his abrasive nature, screaming at Gina, the woman sitting at a card table next to him. They had signs advertising fortune tellings, or tarot card readings, or whatever the hell it is that these Gypsies actually do. I began to create a life for Gypsy man. Maybe he had a wife at home. Or a kid. Maybe this is how he supported his son. Maybe he brought him gifts with the money he made from telling people what there lives would become. Or maybe he was just a huge dick.

He seemed to be intent on reminding Gina that he was the Gazdah, an unfamiliar word for boss — at least, best I can tell from context and the Google machine. But he also seemed to be suggesting that Gina wasn’t Gypsy enough.

He took a drag on a cigarette, his eyes hidden by dark sunglasses, and he walked back toward Gina. There was some inaudible conversation, something I couldn’t pick up, and then there was this. He mentioned Louie and Victor and Sammi, the rest of the Gypsy crew.

“I’m the oldest son! When I die, then he’s Gazdah. Not Now. Perry knows that. There’s only one king!

For nearly 20 minutes, Gypsy Man would go into these rants. And then he would stop. He’d see a few potential customers walking by. And he’d turn on whatever charm was still oozing from those leather boots.

At one point, there was a gust of wind, and the large umbrella that was providing a few feet of shade started to blow down the wide alleyway.

Gina was helpless. And the umbrella looked to be heading toward the other end of the park. But a second later, an elderly man who had been watching the whole scene jumped up from a bench and snagged the umbrella.

Finally, the Gypsy man broke his guise for just a second. He was no longer loud or blunt or even dickish. He was just appreciative, the most honest of human emotions. His umbrella had been saved. His workplace would soon be restored. And he began to rush toward the elderly man.

One thought on “The Gypsy Man”