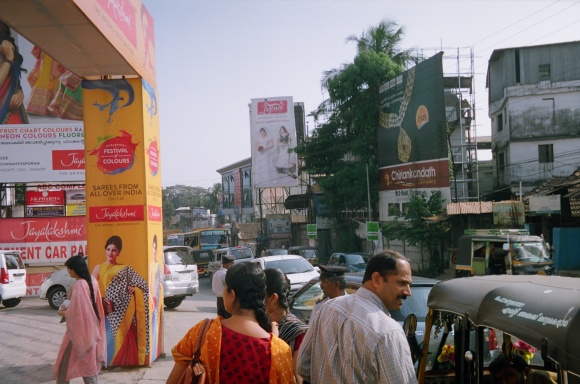 The car accident was actually the perfect welcome to India. About ten or fifteen of us, fresh off the plane and jetlagged from twenty hours of travel, boarded a bus for a ninety minute ride from the Kochi Airport to the hotel in Thrissur. It was inescapable to not quickly notice that we would experience an eventful ride.

The roads were packed with all types of transportation, each vehicle or body speeding and weaving back and forth between two lanes as though no one else existed. The honking of a horn, criminally under-utilized in America, in my opinion, was used on the reg here, sharp and loud sometimes, other times musical and multi-note, always ubiquitous and much more amusing to hear than annoying. There were pedestrians on the side of the road, other buses, cows in some places, countless motor scooters and dilapidated motorcycles and cars so small you barely noticed them, presumably even if you were a driver, an assumption verified by a whiplash-inducing slam of the brakes, punctuated with the sound of metal against metal.

I was in India for the marriage of two amazing people – Tulasi and Chris. They were married on New Year’s Day. The ceremony was nothing like a wedding in America, much better, much more casual, and in a convention center that could fit a thousand people. The audience watched the bride and groom, who lounged on a sofa, as they partook in a brief ceremony before an hours-long march of friends and family came up to say congratulations.

I couldn’t help but feel slightly out of place. Then I remembered what I was wearing and felt much better.

We, Tulasi and Chris’ American guests, wore Indian clothes to the wedding. For the women that meant saris. For the guys, that entailed so much more. We were to dress in what felt like clothes of the royals, with jewels, with the grace of Joffrey. 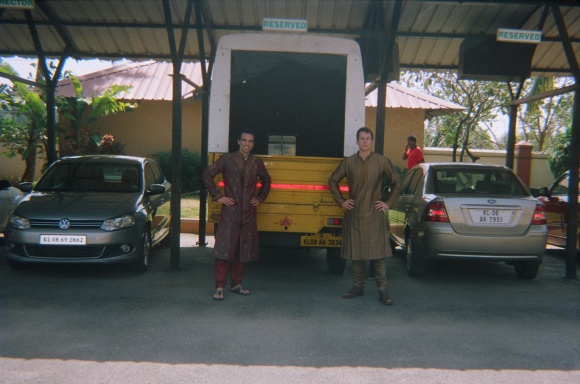 For the reception we wore slightly more casual garb and as pants wore white women’s tights that at least one person referred to as jeggings (confession: I’ve already worn these under my jeans twice since being back in the subzero temperatures of Pennsylvania). These outfits ended up perfect for dancing and, oh, did we dance. 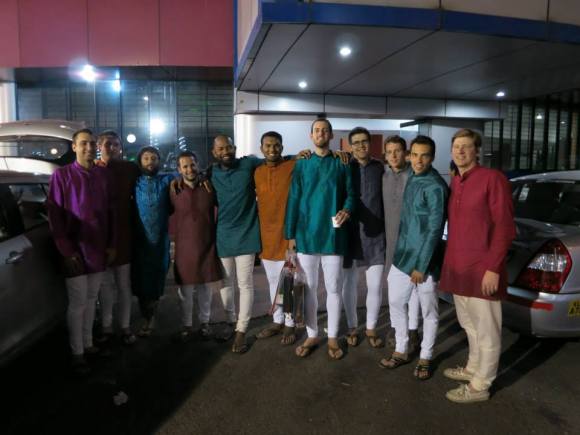 Over two days, our group of American friends and Abhay, Tulasi’s awesome cousin, learned an Indian dance to present at the wedding reception. Somehow we actually memorized it, three minutes worth. These are some of the cue words used to signify the moves.

We performed it shortly after the reception began. But Tulasi’s grandmother missed it. For grandmothers, you do anything, so we did it again. Please enjoy the video and please pay particularly close attention to my friend Pat Smith. He is wearing the gray and is in the second row for the most of the video. You’ll be able to notice him as the person who is constantly looking at everyone else to see what he is supposed to do, like a second grader at the all-school Christmas pageant during a performance of “Good King Wenceslas.”

How was the food?

I did like Indian food, a lot. But man there was a lot of curry, curry at all hours of the day, curry in all varieties. I felt like I was in Forrest Gump, chatting with Bubba all the time: curry with mutton sauce, curry of a coconut base, curry kebab, curry creole, curry burger, curry sandwich. That’s about it, Forrest.

The best food for me was the naan. Dipping that into curry and rice or whatever else was on your plate was a satisfying way to live. I learned not to use a fork when I did this, unless I wanted to look like a Yankee. Indians did not use forks and they didn’t use their left hands either. To eat, you scooped up your food with the fingers of your right and pushed it into your mouth with a thumb.

Of course, if you don’t want to look like a Yankee, you probably shouldn’t go to McDonald’s either. But after curry for breakfast seven days in a row, being a Yankee sounded pretty baller. So we went to the McDonald’s in Agra on our final day. I had the Maharaja Mac. It tasted every bit delicious as it sounds. 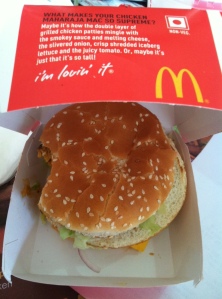 Several years ago I wrote about my love for markets in foreign countries.

“Markets in foreign countries always pull travelers in. Part of it is the shopping. You’re on vacation. You want to shop. You want to buy a native style dress or maracas or a crummy shot glass that will break in your suitcase on the plane ride home.

But more than that, it’s the bargaining. You just can’t do it at most stores. You can’t go into the Gap with $8 and come away with a $40 pair of jeans. There’s a sense of excitement that comes with arguing about a price, even though you’ll still probably get ripped off.”

In India, I bought a watch that stopped working as soon as I reached the hotel. I bought a cool t-shirt that features a sunset and a camel. I bought sunglasses that make me look like Kanye West. I bought some cool paper paintings. The first one I bought cost 400 rupees, roughly $6.50 American. Then I was savvy or stupid enough to buy 10 more for 50 rupees each.

The best market story, though, didn’t happen to me. It happened to Pat, the dancer from above. He was buying a shirt in a market after the boat ride. He was going to pay 300 rupees. A friend of Tulasi’s family interrupted. For 15 minutes, he argued, tearing into this vile salesman who was all of 14 years old. When the kid wouldn’t budge, he walked Pat to another salesman down the road, who unfortunately didn’t have the shirt. They walked back. Argued some more. Finally, the kid relented: 270 rupees. The boat almost left without them.

If you ever go to India, buy some beedies and smoke them. I’d share more, but one day I plan to move to Park Slope, Brooklyn, and make a fortune selling them to hipsters. 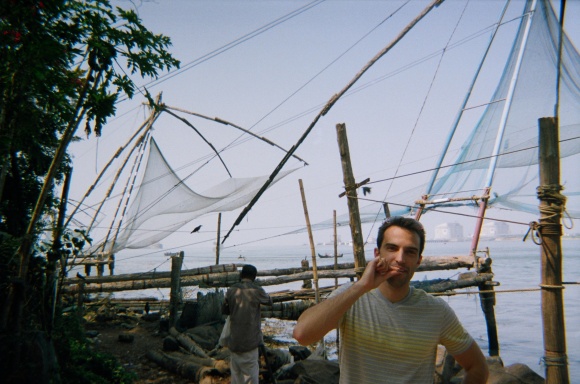 A flood of nostalgia was inevitable on this trip. After all, I came to India armed with a Kodak disposable camera (27 exposures, don’t forget to spin the dial after each shot!) and wore my usual assortment of clothes that should have been permanently locked in a closet by at least 1996.

In high school, I went on mission trips to Juarez and Guatemala. These spring break excursions remain some of my best memories of my teenage years. We obviously worked for a good cause but mainly you got to hang out with your friends, getting to be a kid. The adults set the itinerary and you followed along and filled in your own details.

The trip to India was like this. I felt like I was in high school again, everything graciously scheduled and planned by Tulasi’s family. One afternoon we were set to go shopping. The next morning meant getting up at six for a boat excursion followed by a party at which the girls received henna tattoos and the guys drank on the roof, then the engagement party, the wedding, onward to Northern India, etc.

The best vacations are when you don’t have to do anything, when you don’t even have to think. Just tell me when to get up and have some naan ready to eat and I’m good.

In the darkness when our group arrived at the hotel in Agra, home to the Taj Mahal, I decided the next morning, a Saturday, would be the perfect time to try running in this country.

In the daylight, when we awoke and stared outside our hotel window, the perfect opportunity lost some of its luster. We were looking at the outside boundaries of a slum. Kids were flying kites and playing a type of cricket, using a rock rather than a ball. Fine. Nothing looked particularly ominous until we noticed a single stray dog and then, in the distance, a pack of three stray dogs. They were looking in the direction of the lone dog, teeth bared and clenched, and then they charged at him. I didn’t bother to watch the result. 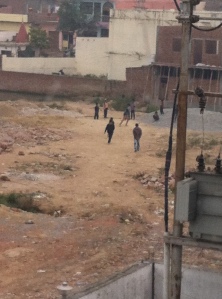 A thought entered my head: Maybe running through the streets of Agra isn’t the smartest idea.

Another thought entered my head: Just go for it. Thank God I did.

When I studied abroad in Rome, the group of students in my program got a free tour of most of the city’s historical sites our second day. This meant the Forum, the Pantheon, the Trevii Fountain, the Coliseum, etc. At the Coliseum, my friend Patrick Phelan thought about how cool it would be if we had never seen it before, if history books and the Internet had not captured its beauty in pixels, reducing some of the wonder that comes when you see it firsthand simply because you know what to expect.

The Taj Mahal was like that. One of the seven world wonders.* We read about it in my sixth grade social studies class and saw the pictures. In middle school, I think I probably crashed a virtual airplane at the foot of it while playing Flight Simulator 98.

*I can’t think of many of the others off the top of my head, but I do know the “Eighth World Wonder” comes from this eminently forgettable song by Kimberly Locke.

And yet when I saw the Taj Mahal, it was like nothing I’d seen before, not in the pictures and not of anything else I’ve seen in my life. It was so massive, so white, so pristine… I can’t describe it. 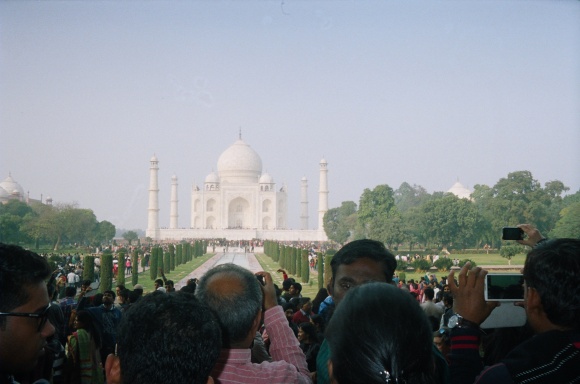 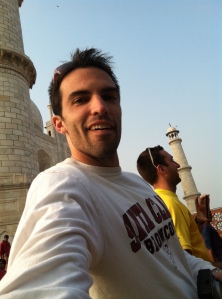 I choose the best times to travel outside of the U.S. My family visited my brother in South Korea last April, a few days after Kim Jong-Un threw his first temper tantrum as supreme leader/foremost asshole of North Korea. He was threatening to nuke the South, particularly Seoul, where we’d be staying.

America, to the best of my knowledge, has had almost no problems with India since the latter country’s independence in 1947. None, until last month.

An Indian diplomat in New York was frisked and held in jail for allegedly providing unfair wages to a servant and lying on her visa, and India retaliated by dropping security at the American embassy in Mumbai and forbidding the embassy’s club from selling alcohol and food (um, what?). From what I had read, India was angry at America for one of the first times ever. While I certainly wasn’t expecting the wrath of Kim Jong-Un, I kind of wondered about the reception for Americans.

One afternoon, three of us felt like exploring the neighborhoods around our hotel in Thrissur. After a quick stop shopping and failed attempt to sneak into a pool at another hotel we stopped inside a bar. The name of this bar was “BAR,” so we thought we knew what we were getting into. We really didn’t.

The place was a true dive, filthy and dim as a movie theater. We almost second-guessed our decision but forgot those thoughts quickly.

Some of the best parts of any trip abroad, maybe any trip, for me, are the random people, the small connections you never anticipate and never forget.

The manager of the bar visited our table. He spoke English just a little better than we spoke Hindi. He still had something to say. In cavalcade of “OK’s” and “Happy New Year’s,” he said for America and for India and for peace. We held up our Kingfisher beers and toasted.