My most reliable rebounder 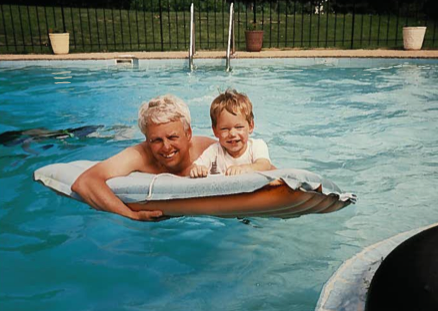 For as long as I can remember, my dad always answered the phone the same way:

It was his signature, the emphasis always put on the second syllable. “Frank-DODD!” From rotary phone (our house had one), to the years we installed a second line to appease my older sister (early 90s!), to the black car phone my dad installed on the floor of his 1985 Mercury Grand Marquis, it was always the same: “Frank DODD!”

These days, it’s an iPhone.

You should see it. My dad can do many things on that new iPhone. He can check Facebook, and “favorite” my Tweets on Twitter, and he can fire off a group text to his four kids. On Tuesday night, my dad’s 70th birthday, I was sitting courtside at the Baylor-Kansas game in Waco when the latest text buzzed in.

“KU was in control all the way,” my dad texted.  Baylor should be better!!!!”

But for every tech upgrade, for every new year and every new phone, my Dad has always answered the phone the same way: “Frank DODD!” There is something friendly about it, something honest, simple and helpful

On my dad’s 70th birthday, he hit the road for work. He was in Salina, Kan., riding out the week’s snowstorm, hoping to call on a few clients. There was no big party, no big celebration, hardly any gifts — at least not yet. (There will be soon.) It was a Tuesday in February, so my Dad did what he always does: He got in the car and went out to sell some mattresses.

For more than 45 years, he’s worked in the mattress business, traveling the state of Kansas, cultivating relationships, memorizing the small towns that dot the Flint Hills and beyond. For a while, my Dad’s territory was limited to the Kansas City area. It was a lot more convenient. His kids were growing up, and he wasn’t on the road near as much.

But I think if you ask him, I think he’d say that he preferred taking those trips to Western Kansas.

When I was growing up, my family would sometimes meet somebody from one of those small towns. Salina, or McPherson, or some place even smaller.

“I’ve know that town,” my dad would say.

“Oh really, how?” the person would answer.

My Dad would pause for a second, then smile:

“I’m in the mattress business.”

My dad does none of this. He still works, he’s not a grandparent, he never really relaxes. (Family trait, I guess.) So yes, it’s hard to believe, mostly because I still feel way too young to have a parent turning 70. But really, it’s always been like this. The Dodd Men like to stretch out the generations. I guess it’s our independence, that desire to savor bachelorhood as long as possible.

When my dad was born on Feb. 4, 1944, my grandfather was serving in the Army. It was World War II. He was an officer. My dad was his second son; the first had died in childbirth. My grandpa was already 33.

When my oldest sister was born on Halloween of 1977, my dad was the same age. I came along nine years later. Dad was 42, my mom a year or so younger. Their friends said they were crazy for having a fourth kid at that age. They said otherwise. (Well, that’s what they told me.)

I never really noticed the age difference growing up, but people were always pointing it out. My dad would take me to hit tennis balls, and some well-meaning lady on the next court would take a break between sets and walk up:

“Oh, isn’t it nice that your grandpa takes you to play tennis.”

Another time, in maybe the fifth grade, a baseball teammate stopped me in the dugout during a game at the old 3&2 baseball complex. My dad was a coach, although I can’t remember him ever really doing anything other than smiling and buying Gatorades after the game.

“Are you adopted?” the kid asked.

“Your dad is really old,” he continued.

Of course, my dad didn’t feel that old. To me, he was a hero. (And looking back, my old baseball teammate didn’t have a great grasp for the fertility of men in their 50s.) Maybe it was just the white hair. It was really white. If independence is the No. 1 gene in Dodd men, then grey hair is No. 2. My Dad’s hair was almost fully white by the time he was 40. I can’t ever remember him without it.

“His salt and pepper hair,” my mom would say. “That’s what I liked about him.”

For years, my dad always told the same story. On March 1, 1955, his father took him to the first game ever played at Allen Fieldhouse. His dad was a Kansas grad who had opened a furniture store in Manhattan. My dad was a young boy growing up in Wildcat territory.

I always thought this was a really cool story. My dad and my grandpa, going to the first game at a historic venue. But the story always ended the same way:

Nearly four decades later, my dad would continue the tradition. Every March, he would get my brother and I out of school and take us to the first day of the Big Eight tournament at Kemper Arena. I thought it was the coolest thing in the world. Not only did I get to miss school for a day, I got to watch four college basketball games.

Every year, I would look up in the rafters and see the same banner: Kansas City, host of the 1988 Final Four.

On our way home, we’d always walk through the “Fanfest Area” next door at Hale Arena, home of the famous American Royal. Looking back, it was a glorified warehouse with a few temporary basketball goals and some big-ass tubs of free 7-Up.

For me, the 7-up tasted perfect.

When I was growing up, the question would usually come late in the evening: “Hey Rus, I’ll rebound if you want to shoot?”

It was simple and earnest, and it usually worked. My dad never really pushed us into sports, but maybe he had honed the honest sell during all those nights out on the road. When I was a kid, he used to take my oldest sister out to the tennis court, feeding her balls with the same cadence:

He coached soccer, and basketball, and he always kept the team’s paperwork and information neatly in a three-ring binder.

Maybe he sensed that a 5-foot-10 guard with limited athletic ability needed to work on his outside shot, so we’d go out to the driveway on warm summer nights. Our driveway was on a hill, so the ball was always bouncing down the street. And it was narrow, too, so it took some work to practice threes. I would have to stand on the brick sidewalk up by the house, a few feet off the driveway, and from there, I would hoist up 50 or 100 three-pointers.

My dad would rebound, always making sure to count each shot.

“Dad,” I would say. “You don’t need to count each shot. Just rebound.”

A second later, I would put up the next shot.

My dad taught me many things growing up, but I can’t really remember any great words of wisdom. He would much rather just do the right thing.

Mostly, though, he taught me this. As we go through life, there’s nothing better than hitting the road and going to work. And when the day is over, it’s even better if you can find somebody to rebound for.

11 thoughts on “My most reliable rebounder”