I stared down your hollow hall. Lined with what looked like static stars in a sky divided into fourths. Your beams spending summer swelling, spitting beads of sweat from bubbles, an uneven topography.

END_OF_DOCUMENT_TOKEN_TO_BE_REPLACED 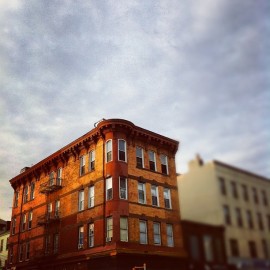 I fall from the curb one wheel at a time and stand up to push with all my pounds against the slope. It’s never easy.

Up 16th Street east away from the harbor, leaving the Statue of Liberty behind. Each block is a confused collection of old and young: peeling, window-barred houses in the shadow of six-story condo buildings with ten-foot windows. A Puerto Rican flag hung here two years ago. Now, Liverpool FC.

END_OF_DOCUMENT_TOKEN_TO_BE_REPLACED

Invasive Species (They and Me and You)

I see the way they look at me and mumble a meek “Hi” as I duck into my renovated apartment in the building we share.

After all, they were here first. They lived through the days of glass-enclosed cashiers, barren after-dark avenues and the crime that made New York notorious. My Brooklyn — its craft beer bars, wine shops and organic groceries — isn’t their Brooklyn.

END_OF_DOCUMENT_TOKEN_TO_BE_REPLACED

The Sound of Nothing

Nothing has a sound, and it’s predictably difficult to describe.

It comes in the moment when your own breath sounds like whipping wind. It comes when your shoe’s rubber-on-grass pad is audible from six feet up. It comes when the sky is clear and dark and the air is cold and crisp.

END_OF_DOCUMENT_TOKEN_TO_BE_REPLACED

In my six years of living in transplant-centric locations (Lawrence, Kan., and Brooklyn, N.Y.), I’ve come to cherish one of life’s more underappreciated delights: Staying put for the holidays.

Back in Lawrence, some of my favorite times included window-down drives on relatively empty summer-evening streets, enjoying the solitude of the Student Rec Center during its reduced summer hours and running the hills of the car-free streets just north of campus before the summer heat hit near mid-day. Staying in a snowpacked and silent Lawrence over winter break felt like being in on a beautiful secret that the rest of the world only stumbled upon twice a week at Allen Fieldhouse.
END_OF_DOCUMENT_TOKEN_TO_BE_REPLACED

We’re half awake in our fake empire.

Push through a revolving door and break the plane of a cold that hangs solid in the air and amplifies all the small sounds, making the busy sidewalk feel almost empty. The lights from the taller buildings — 30 or 40 or more stories up — create a soft electric glow, a warm blanket of false twilight that hovers and holds the city close.

Maybe you’re headed home to dinner and bed. Perhaps you’re off to the gym. If it’s Thursday, you might be bound for a bar or dinner to meet co-workers or make connections. No matter where you’re going, you’re headed to whatever semblance of home you’ve built sooner rather than later, because tomorrow’s Tuesday or Wednesday or Thursday or Friday. Another day of work.

The National is the soundtrack.

END_OF_DOCUMENT_TOKEN_TO_BE_REPLACED

At Mile 7, an older woman read the shirts as they sped past.

Two blocks south, a stout policewoman stood atop the raised median of Fourth Avenue, her uniform a blue-black silhouette against a brown Best Western wall.

Her hands swayed from waist- to chest-level as she issued a slow and steady clap for the droves streaming past on either side.

END_OF_DOCUMENT_TOKEN_TO_BE_REPLACED

“This is our decision, to live fast and die young.
We’ve got the vision, now let’s have some fun.
Yeah, it’s overwhelming, but what else can we do.
Get jobs in offices, and wake up for the morning commute,”
— from “Time to Pretend” by MGMT

And so the cycle continues…

The other week I was giving one of my friends a ride in Lawrence, Kan. We we’re going to the gym to play basketball — but that’s not really tangential at all to the point of this story. Of course, if you want to draw some kind of obscure meaning or motif from the game of basketball. Go ahead.

So my friend slides into the car, and the first thing he sees is a stack of old, beat-up CD’s. Most of them were burned years ago, but they’ve gone back into rotation in my Ford Taurus because I don’t have an iPod adapter.

Moments later, I pop a CD into the car’s CD player and start driving. And then the thought comes.

Wait, it’s wild to still have CD’s in your car? Really? What year is it?

If people still bought CD’s, thousands of college-aged kids would be trekking to Best Buy or Target or — gasp — Sam Goody to purchase the album.

But, of course, people don’t buy CDs anymore, so I’m not really sure of the significance of the “album release date”.

I suppose the album also becomes available on iTunes today, so perhaps a large number of technologically-challenged kids will fire up their laptops and throw down $12.99 (or whatever arbitrary cost an album on iTunes goes for these days).

But for me — and I’d like to hope that I’m not alone — all this day means is that the commercial album is now in the public domain. And that fact should make it relatively easy to download the album for free on the latest trendy downloading apparatus*.

*And yes, I know that any “true” techie could have located a pirated copy of the album on the interwebs weeks ago.

So, yes, in one sense, this story is about the demise of the album format. About how the digitization of music has created a disincentive for bands to spend time crafting brilliant studio albums. And about how “themed” rock albums — and album with eloquence and coherence and a collective narrative — are dying.

But that’s only a part of the story.

It’s also about how those same forces — the internet, digitization, and the proliferation of social media — have made it impossible for a band to stay relevant and hip for more than, say, 6 or 7 minutes. More on this shortly.

And MGMT is perhaps the biggest college band in the world right now. Walk down the street in a college town… and you’ll likely hear “Kids” or “Electric Feel” blasting from porch speakers as college kids play some regional drinking game.

The “hippest” and “coolest” music will always start at college radio stations, where hipster DJ’s with picky tastes will weed out the best up-and-coming bands.

Soon, the music moves to the rest of campus, where it gains traction in dorms and greek houses and off-campus shitholes.

And finally, it reaches its tipping point. Some mag like Rolling Stone is praising MGMT, trying to co-opt some of MGMT’s hipness for the magazine’s own brand.

That’s how the cycle works, has for decades.

Of course, the cycle used to be organic. And there was something romantic about it.

But now, because of twitter and facebook and the google machine, the cycle moves with the intense focus of a college kid on adderall.

And that’s where a band like MGMT comes in.

This band has it all. Seriously. If somebody were to create a band to go viral on college campuses, you’d piece together MGMT.

First off, nobody would even believe that those names could be real?

They play music that’s just poppy enough to attract a mass audience. And it’s just synthy and experimental enough to sound better with the addition of drugs. … Did I mention they’re based in Brooklyn.

But here’s the thing:

Today is MGMT Day. Thousands of college kids will find some way to listen to their new album. And thousands more will listen to it at parties. And soon, some commercial radio stations will throw MGMT into rotation.

And the progression will continue. And for some reason, this will make MGMT progressively less hip.

It’s just too bad it happens so quickly these days.