You Mad at the World, Bro?

Defeating the world is not as hard as it sounds, particularly in March. In this awesome month of green beer, spring break and college basketball, the world becomes an opponent of many coaches and athletes, with nearly everyone involved in college basketball regularly declaring that “it’s us against the world.”

Yes, somebody has already said  and will continue to say those exact insufferable words during March Madness, or they’ll say something similar, perhaps explaining that nobody, and they mean nobody, believed in them. Or, if the timing is just right, they’ll say both.

“It was us against the world,” Louisville’s Peyton Siva said to USA Today upon making the Final Four last year. “Nobody believed in us.” END_OF_DOCUMENT_TOKEN_TO_BE_REPLACED

Standing Outside the Sandusky House

I took this picture on Friday night. Tweeted it to a public and media that were growing increasingly frantic about any hint as to whether a jury would make its decision or deliberate deeper into the weekend. 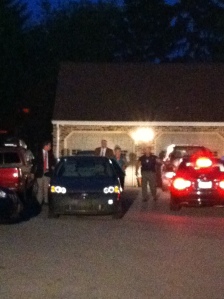 The picture displays Jerry Sandusky leaving his house for what would be the last time, END_OF_DOCUMENT_TOKEN_TO_BE_REPLACED