One last song in Kansas City

It was the last week of classes, maybe a Wednesday, a warm spring morning in Lawrence, Kansas. I had a week left of college — well, technically, a couple days of classes and then finals — and I had promised my editor at the school paper that I’d file a farewell column that afternoon.

I can’t exactly remember what else I had going on that day. That night would be a party for our last night of production at the student newspaper, and I felt like maybe I had something else to do as well. In any event, I wanted to sit down and write that column. I had an idea of what I wanted to write, and I had already pieced it together in my head, but I needed a solid chunk of time. Maybe two hours or so. That should do it, I told myself.

I also had a class that morning at 9 a.m. … Journalism Ethics.

Too bad, I thought. I went to the library and started writing.

Three years ago this July, I left Lawrence. In my last week, living at 1201 Kentucky, we had a barbecue. We cooked burgers. Enjoyed the spring weather. Drank some beer. And played songs on the iPod. I can still remember my friend’s girlfriend, a Kansas native from up north, cueing up the song and pressing play. The first few notes, a symbal crash followed by a piano. I had heard this song before, of course, one of those sounds you hear in a million soundtracks of a million low-rate films.

Bob Seger’s “Roll Me Away”

This song, of course, is pure schlock. Pure 1980s schlock. And this makes a big difference. In the year 2012, one can ironically scream “one, two, three, four…” when listening to “Born to Run” and I believe this is borderline socially acceptable. But Bob Seger’s Roll Me Away? All that piano? And these “Yes, this song is epic” lyrics?

“Stood alone on a mountain top,

Starin’ out at the great divide

It WAS ALL UP TO ME TO DECIDE.”

Well, this is is probably skirting the line of some form of self respect. But here’s the thing: Something changes when you’re about to move. Something makes you think about the last day, the last month, the last year. All those little moments in one place. They accrue. And they gather. And they keep stacking up. And then one day, you realize you’re leaving. And this period of your life is over. And you sit back, and you think about all those moments. And you know what? “Roll Me Away” sounds pretty damn good.

I wrote about my last run through Lawrence, the one where I jogged down 15th Street to James Naismith’s grave. I wrote about leaving college, the next step, and enjoying those last few moments before the proverbial real-life (ish) hit the real-life fan. I wrote about sitting on a Lawrence porch at 3 a.m. and debating about the most ridiculous of thoughts. Was Neil Young better than Cat Stevens? Shawshank or Forrest Gump? Do you think I can hit that street sign with this crab apple?

When I was finished writing, I copied it into an email, sent it off to me editors, and left the library.

In a few days, I will move for the fourth time in the last four years. My last three years have been a cluster of Kansas City. One year back in Overland Park. One year in Wesport-ish. One year in Roeland Park.

The only constant, of course, has been regular journey down to the old building at 18th and Grand. In December of 2008, I showed up at that building for a copy editing internship in sports, the place I had always dreamed of working. A month later, the internship ended, and I went back to Lawrence. A few weeks later, I received a phone call. The place was looking for part-time help on the copy desk. Did I want any hours?

Nearly four years later, I have copy-edited stories about the best place to catch fish in southern Missouri, I have covered the Sunflower League girls tennis tournament, and I have covered so many Friday night football games, and swim meets, and basketball games, and written so many blog posts about WAR and xFIP and why Alex Gordon is actually quite a good baseball player.

And now… I’m going back to Lawrence. Back to do the job I’d never thought I’d ever get or have or even think about. Leaving Kansas City again. Well, sort of.

Late last week, I went to watch the Avett Brothers at the Crossroads near downtown, just a block or so east of 18th and Grand, and maybe the best outdoor concert venue in the Midwest.

The sky was clear, the beer was cold, and the city hung behind me, buildings fading into the dusk. To the east, a few miles away, was the Negro Leagues Baseball Museum and 18th and Vine, the place where Louis Armstrong and Charlie Parker found a place to play. To the south, the city kept moving, Crown Center, and then Midtown, and then Westport, and then the Plaza… and so on.

At its core, I think Kansas City is a neighborhood town, so many little pockets with bits of history and great barbecue and places to sit down and put a dollar or two in the jukebox. Sometimes it’s easy to forget that, tucked in your own little corner, driving the same streets day after day.

The next morning, after the concert, I woke up back in Roeland Park. I had left my car in Brookside, 63rd and Wornall, and a morning run seemed like the easy fix. So I took off, past Oklahoma Joe’s on Mission Road, past Woodside Tennis Club on Rainbow., and past Hi Hat Coffee on State Line, a place so small (maybe room for four or five customers to stand inside comfortable) that it must be the best pound-for-pound coffee shop in world. 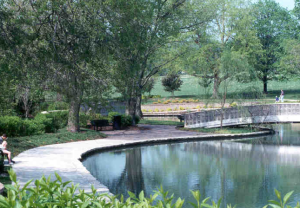 A few seconds later, I ran past Pembroke Hill, where Tom Watson matriculated and Kareem and JaRon Rush made history on the basketball court, and kept moving toward Loose Park, skipping across Ward Parkway and jogging past that pond in Loose where everybody in Kansas City history has taken their wedding pictures. (At least, it seems that way.)

This is Kansas City.

I once heard a great writer hash out the meaning of a dive bar in the simplest way: “Every body needs one,” he wrote.

I first walked into the door at the Caddyshack a few years ago, not long after I returned to Kansas City from Lawrence.

In some ways, the Caddyshack is not so much a bar as it is a homebase. It’s near 3rd and Holmes, right near the edge of Columbus Park, a few blocks from the River Market. There’s popcorn, and a jukebox, and golf trophies hanging off the ledges on the wall. There’s maybe the best pizza in the city. And there always somebody there, folks trying to forget something, folks trying to shoot some pool before they have to go, folks debating about the most ridiculous of thoughts. Was Neil Young better than Cat Stevens? Is this the Chiefs’ year? Should we have another?

For the last 2 ½ years, I’ve been sinking money into the jukebox, making my picks with care, like the fate of the European Union’s debt crisis depends on the next song by Don Henley or Rod Stewart or Tom Petty. A few nights ago, I slipped into the Shack after a late night at work. The place was halfway full, another Kansas City night fading away, and I made my way to the Shack jukebox. I leaned over it, sliding my dollar into the machine, and thinking about my last few weeks as an actual resident of this wonderful little town in the Midwest.

There was only one thing left to do. I went straight for the Seger.

One thought on “One last song in Kansas City”